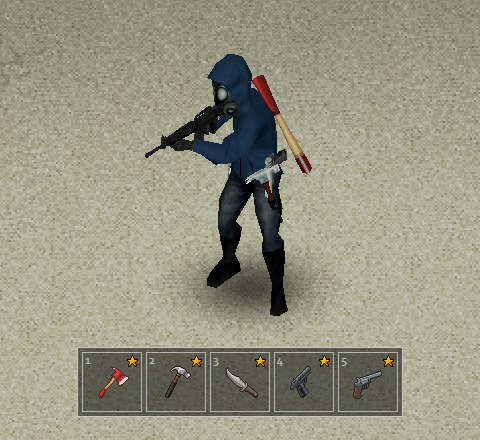 Melee weapons are items used in close-range combat, and much quieter than firearms (but not 100% silent). There are seven sub-categories: axe, long blunt, short blunt, long bladed, short bladed, spear, and improvised. Each category (excluding improvised) has a corresponding skill that makes the player use the given melee type more efficiently.

There are 5 main weapon attack types, each with their attack moves: One-Handed, Two-Handed, Stab, Spear, and Heavy.

One-handed melee weapons are equipped in just one hand to achieve the weapon's maximum impact. They can often be attached to the belt, in slots 2 and 3, but in some instances like with the machete, lead pipe and metal bar, they can only be equipped on the back in slot 1.

Two-handed melee weapons must be equipped in two hands to achieve the weapon's maximum impact. They can be equipped in just one hand, however with a reduced impact and massively increased endurance costs.

Unlike all other two-handed weapons, heavy weapons must be held in two hands. Heavy weapons have a slow attack speed with a high attack damage but also cost a lot of endurance to swing due to their high weight and existence of an additional endurance modifier.

TL;DR: Take base speed stat with a grain of salt and try to compare it only within weapons of the same attack type.

Firearms require ammo to use and are loud, attracting the attention of nearby zombies. They benefit significantly from high Aiming and Reloading skills, with Aiming in particular improving the accuracy, range, and ease of use of firearms.