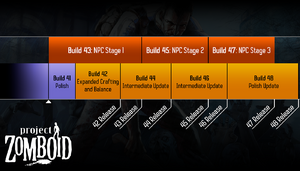 Development roadmap towards full release as of January 2022
Build 42 is an upcoming update for Project Zomboid focusing on expanding "crafting and balance". The update is being worked on in conjunction with the first stage of NPCs (Build 43). While this will not be as significant of an update as the first iteration of human NPCs, build 42 will still be a fairly beefy update in terms of what it brings to the game.

Balance will be focused around existing mechanics that have been neglected since they were introduced, specifically traits, professions, skills, the medical system, and reducing exploits during character creation, along with loot balancing and more.

Additional content is expected to focus around expanding the metaphorical 'tech tree', to provide a richer late game by creating a way to reproduce items, reducing the need to respawn loot. This may also expand on professions, allowing them to use their pre-apocalypse skills to rebuild in the post-apocalypse. Further features include those that could not be added in Build 41, such as improved fire graphics/mechanics and potentially a range combat overhaul, as well as a new fishing minigame by Aireron, improved key system by Blair Algol[1], new human voices for survivor breath sounds as well as server-side ownership of items in multiplayer.

This update will include the first visual and intractable animals, however with very basic AI. The first batch of animals will be those that compliment the new 'tech tree', such as leather or wool. Therefore, other animals such as dogs are unlikely to be added in this version.

Build 42 was previously planned to be the "Hunting update", focusing on the inclusion of wildlife roaming the countryside, including deer, mice/rats, feral dogs and more, along with complimentary mechanics, such as expanding trapping. Animals were going to be the first feature utilizing Lemmy's AI code, prior to implementation of human NPCs (Build 43). Instead, animals will still be added in build 42, however with basic AI.

Hunting is one of the oldest planned updates that have not yet been added, behind NPCs (Kate & Baldspot), mentioned as early as October 2012. The addition of hunting has been among the list of features to add prior to 1.0, however hasn't been feasible until the Animation Overhaul (Build 41).