A ham radio is an interactive item added in IWBUMS 33. It allows the player to listen to radio broadcasts, including music stations, news reports, and military stations. As a ham radio is a two-way Radio, it can be used for distance communication in multiplayer games, or simply to "throw your voice". 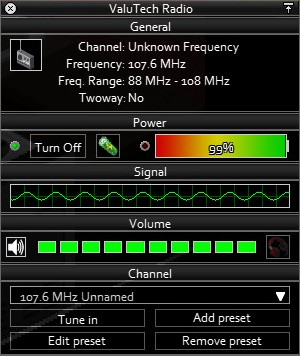 An example of the interactive radio interface.

All radios require batteries to function, but every radio is found with a full battery included. To use a radio, right-click it in the world and select "Device Options" to open a control panel window. Here you can see information about the radio's specifications and current settings, power it on or off, remove/replace the battery, adjust the volume, add earbuds or headphones for stealthy listening, mute the mic, and select and edit preset frequencies.

Ham radios are two-way radios and will transmit and reproduce voices at a distance. "Voices" includes both the Shout command used to draw zombies' attention, and chat messages in multiplayer. This can be prevented on the transmitting radio by muting the mic. The reproduction will be silent to nearby players and zombies if the receiving radio is using earbuds; otherwise, it will make noise in the environment depending on the volume setting.

The obvious use of this is for communication on multiplayer servers that have disabled global chat, but it can also provide a single-player tactic: throwing your voice to draw zombies where you want them, though walkie talkies serve this purpose better due to their low weight.

Ham radios can only be used as stationary furniture. To convert a furniture radio to an item, pick it up like any other furnishing:

To convert a ham radio to furniture:

All radios can be dismantled with a screwdriver, producing a variety of components as well as a small amount of Electrical skill XP.

The obtainable items are as follows:

The odds to receive items effected by Electrical skill:

Ham radios can be found in containers

Most radios will be found with one or more preset frequencies, usually one of these local commercial stations:

Ham radios are one of the three types of communication devices.