Knox County is a fictional area in America where Project Zomboid is set. It takes place within the city of Muldraugh and West Point, Kentucky, and surrounding countryside. 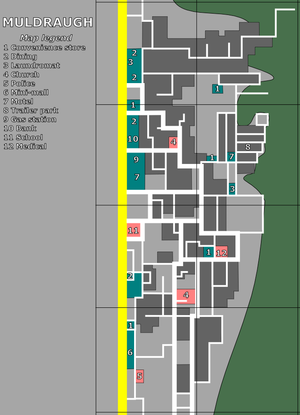 Muldraugh, as of RC2.9. (click for a bigger version) 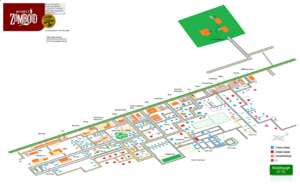 also Muldraugh with buildings, as of RC2.9. Rotated version (click for a bigger version) 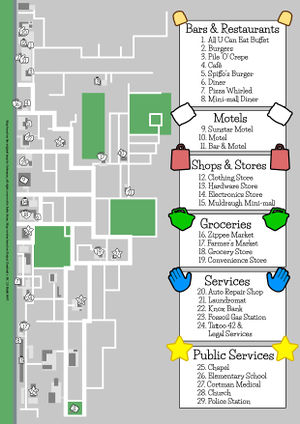 Muldraugh tourist map with symbols, also as of RC2.9. (click for a bigger version)

Thanks to the efforts of Blindcoder, the most complete map available can be found here: http://pzmap.crash-override.net/

You can help him expand it here: http://theindiestone.com/forums/index.php/topic/78-project-zomboid-map-project/

The map has been remade completely for RC2.9, since the streaming system enables a much larger, continuous world. Currently the map consists of the towns Muldraugh and West Point, with a vast but almost completely unfinished world around it. Mauldaugh alone is 8 map cells, whereas the 0.2.0 version map fit in one cell. The map is heavily inspired by the real towns of Muldraugh and West Point. Future locations will include vast forests surrounding the town, highways off the town, farm houses near the outskirts of towns, and even more cities—perhaps eventually Louisville.

Compared to Muldraugh, West Point consists of a grid-like pattern of streets. 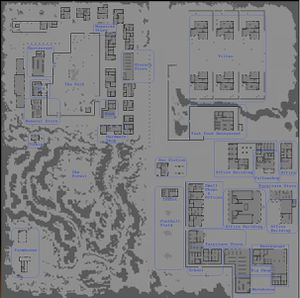 Knox County, as of v2.0q. (click for a bigger version)

A completed map of Knox County, showing the City, the Northern Highway, the Farmhouse and the off-grid Forests. (click for a bigger version)

The main map is currently divided in 4 quadrants with another off-grid map which contains randomly generated forests and the newly added Well.

This map is no longer worked on but will be playable in future builds.

The Suburbs was originally the only explorable area of Knox County, until the addition of the Forest in 0.2.0. Currently, it contains 22 buildings of varying sizes, from small one-room shacks to shops and houses. There's at least one warehouse and multiple shops, while the rest are houses. The Suburbs are currently located in the Northwestern quadrant of the main map.

Located in the Northeastern quadrant is a luxurious set of 6 Villas, containing each 1 garage, 1 big kitchen, 2 bathrooms on each floors and 3 bedrooms. An ideal getaway for building a nice fortress as many trees surround the Villas like a protective barrier. In the southern part of this quadrant is also a small Fast Food Restaurant.

Containing mostly shops and office buildings, the Downtown District is located in the Southeastern quadrant. A perfect sector for quick supply runs. The most important buildings in this quadrant is the game's second storage Warehouse and the big Restaurant right next to it.

Northwest from the Villas is the Northern Highway. Entering this area brings you to a different map cell. This long road stretches for many cells, but in the first cell on the left side of the road there will be a small farm house. If you continue on the Northern Highway to the second cell you will come across an opening to a dirt path. That dirt path leads you to another map cell and to a large farm filled with wheat fields, small shacks, a well, and a barn.

The Forest was the second explorable area of Knox County. It contains about six hundred trees and a farmhouse in the center. The farmhouse contains no materials but houses some survivors.

See the Mods section for user made map cells, which expand onto the default map cells.