A Gun Nut (right) threatens the player with his shotgun.

NOTE: This page discusses a legacy version of NPCs, which are no longer in the game currently. If you hear gunshots or helicopters, that's just the metagame messing with you. Not to be confused with characters on radio or television.

Non-playable characters (NPCs) were any character within the game that were not controlled by the player. They could perform various tasks, such as engaging in combat with zombies, scavenging objects and materials, and interacting with the player.

After early builds of the game, NPCs were removed. In an upcoming update, NPCs will be reintroduced with updated mechanics. 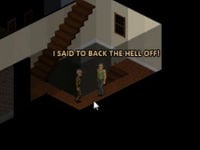 Survivors were able to team up with both the player and other survivors. The player could request a human to team up, he may answer positively or negatively based on the player's attitude and the NPCs personality. This may end in a good relationship or it may end in a duel between the player and the npc (this happened if the player was aggressive towards the NPC, or the human the NPC was teamed up with).

Like the player, the survivor had to consume food and water to survive. Survivors would scavenge buildings and fortify shelters by barricading or putting sheets on them. Survivors also allied without a player, and gave instructions to each other to hunt for food or zombies.

Survivors had traits and professions that the player also started with, and they too can level up skills. Survivors are also given a level of bravery; more cowardly survivors will flee from enemies while braver ones will stand and fight, despite him fighting a hopeless battle.

There were 3 types of survivors: gun nuts, loners, and true-neutrals.

The gun nut was an aggressive survivor, who would attack the player, zombies, and any other survivor on sight, although a warning would be given before the attack. The player could usually kill them with relative ease with the right strategy and rationalized thought. These NPCs would never spawn naturally, only in scripted locations in story mode. They couldn't join the player's team or chat with the player.

The loner was an "initially-neutral" survivor who would spawn naturally throughout Knox County. Loners wouldn't want to join the player regardless of the player's attitude, any attempt to team up would end in anger. A loner that was continuously bothered with team requests would fight the player. Other than their team attitude, they would generally act like true-neutral survivors.

The true neutral survivor was a survivor who would team up with the player if they had a good attitude. They could then be ordered by a "leader" (usually the player if the group is formed by a player). They could be ordered to "stay", "follow", or "guard". In addition to that, they would fight or flee from zombies depending on personalities. The player could give a team NPC items, and the NPC would respond with gratitude.