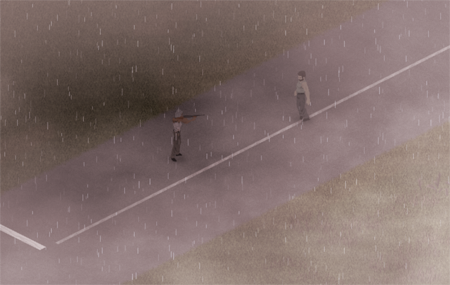 Weather affects various systems, including farming, foraging, player health and more. Project Zomboid uses a realistic climate system, based off Kentucky’s humid subtropical climate. There are four distinct seasons, with substantial variations between the summer and winter. Some winters can see extremely low temperatures with large amounts of snowfall, whilst summers may be scorchers, however the degree of this can vary with each new season.

The weather is heavily defined by weather fronts, which can be either cold (low airmass) or warm (high airmass), each of which will be accompanied with its own weather conditions. The intensity of the weather conditions is governed by the strength of the previous front, and the strength of the current front. For example, if the previous front was a strong warm front, and the current is a cold front, there will be greater chance of a tropical storm occurring. Each front can last a few days up to several weeks.

There are several weather types within Project Zomboid, all of which are determined by the current weather front. The player can experience, cloudy, rainy, snowy, stormy, foggy, windy and sunny weather.

Clouds can vary in density, often having a great effect on the level of light. Widespread cloud cover is often associated with a warm front, reducing the level of light. Thick clouds can often occur during a cold front, plunging the world into darkness for a brief period. The current cloud cover can be seen as shadows on the ground, or even as reflections in vehicle windows. Clouds are represented on the "investigate area" window in the sky with the intensity starting at being absent, and progressing from white to dark grey. 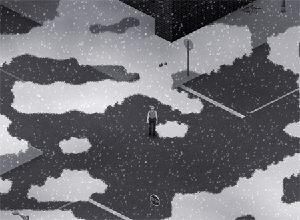 Rain, also referred to as precipitation, can come in several forms, from light showers to heavy rainfall. Light showers often occur after a warm front has passed, since this will usually result in widespread cloudiness. Heavy rainfall is often associated with a cold front; however, this can also occur during a warm front. Rain will create puddles, gradually increasing in size, with rate dependant on the intensity of rainfall. Puddles don't have any effect on vehicle traction. Puddles are a natural water source, allowing the player to drink or fill a water container, however the water will be tainted. Puddles will gradually dissipate after the rain has stopped.

Rain will gradually fill up rain collector barrels and water containers capable of collecting rain water, so long as they are outside in the rain. Rain will also automatically water crops and eventually extinguish a campfire, which can be countered by adding more fuel.

During winter, the temperature can be cold enough for snowfall to occur rather than rainfall. During snowfall, the ground, trees and other surfaces will gradually become covered in snow. Snow will stay on the ground so long as the temperature is less than 0°C (32°F). Once above 0°C (32°F), the snow will gradually melt. Snow doesn't have any effect on vehicle traction.

Rain and snow is represented on the "investigate area" window with a white haze close to the ground and dark grey clouds. Many items become harder to find during the rain, with some being easier to find, such as worms and frogs. Many items are even easier to find shortly after it has stopped raining, rather than during the rain, such as mushrooms. Likewise, some can be harder to find after it's stopped raining, such as medicinal plans (plantain, wild garlic, etc.). Snow will negatively affect most items, particularly plants, such as bell peppers, bananas, or basic items like stones.

If the player is caught in the rain or snow, their clothing will become wet, starting with outer layers and gradually moving inwards, until all clothing is wet. This will eventually make the player wet, increasing in severity depending on the level of rainfall and time spent in the rain. Staying wet, in combination with temperature and wind, will cause the player to feel colder and may eventually catch a cold, causing them to involuntarily cough and sneeze. The rain can be blocked by having an open umbrella equipped, keeping the player dry. Once wet, a clothing dryer can be used to dry clothing and a dish towel or bath towel used to dry the player.
The severity of the rain and snow will affect the player's visibility arc and distance. This will also affect the zombies ability to see and hear the player.

Thunder clouds may form during a cold front, with the intensity varying with the level of airmass. A colder front (lower airmass) moving into a warmer body (higher airmass) will have a greater chance of producing thunder or even a tropical storm, in which has a lot more wind power, thick clouds and darkness. Thunder is represented on the "investigate area" window with flashes of light.
Zombies are attracted to the sound of thunder.
On multiplayer servers, a rumble of thunder can be heard, even if it’s clear sunny skies. This is the result of a player being banned from the server.

Fog, like light showers and widespread cloudiness, is often formed during a warm front. However, fog can also appear during cold mornings, which will usually result in a clear sunny day. Fog can severely affect the player’s visibility, making it somewhat dangerous to scavenge during a foggy day. Fog, like rain, can only be seen outdoors, making it safer to stay indoors when it’s foggy. Fog is represented on the "investigate area" window with a white haze close to the ground.

Sunny days are caused by the absence of clouds, often being the result of a cold front. Clear skies are often accompanied with higher temperatures, increasing the player’s risk of getting hyperthermia. The intensity of a sunny day can be determined by the intensity of the reddish hue when outside or the absence of any other weather effects in the "investigate area" window. The effects of a sunny day can be reduced by removing some clothing or staying indoors. 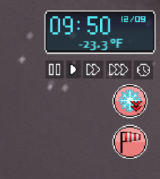 Wind can be observed during any time of the year via the weather effects, movement of foliage, rain and snow direction, or even the cloud movement direction. During winter months, windchill becomes a major effect on the player when outdoors. Windchill will cause the player to feel colder than the actual air temperature, as is displayed on a digital watch. Items/Clothing type can reduce the amount of windchill experienced by the player.

There are four distinct seasons: summer, winter, autumn and spring. Each season has its own unique weather and temperature traits.

June - August
Summer is typically the hottest season, able to reach temperatures up to and beyond 40°C (104°F). Although the typical summer will see very little rainfall, scattered clouds and daytime temperatures averaging 30°C (86°F). However, each summer can be very different from the last, with some seeing lower temperatures and more rainfall. Daylight in the summer is the longest of the seasons.

September - November
Autumn generally has the most extreme weather, having a higher chance of generating tropical storms in the earlier months. Plant life will lose their leaves during these months and may even see snow during the later months. Farming will have a very low yield during autumn.

December - February
Winter is the coldest season, with temperatures often getting into the negatives and down to -30°C (-22°F). Snowfall is most likely to occur during winter, creating snowfields and covering surfaces and plant life in snow. Farming will result in limited yields during these months, with many foragable items impossible or harder to find, plants in particular. Of all the seasons, daylight is shortest during winter.

March - May
Spring is the most average season, with frequent rains, chance of storms and the most likely to see fog. This season is abundant with wildlife, with foraging and farming yielding plenty of food and resources.

The moon cycle is based on a 30 day cycle with 8 different moon phases. Each moon phase provides a different amount of ambient light during nighttime, ranging from 0.0 (New Moon) to 0.7 (Full Moon). The current moon phase can be determined via the "investigate area" window.