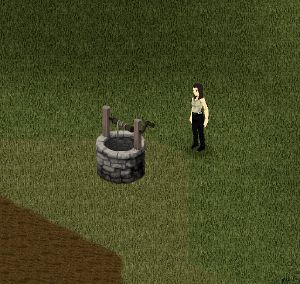 A player near a well.

A well is a man-made structure tunneling down an aquifer for water extracting purposes.

Currently, Wells can only be found outside of the main map cell. There are currently two known wells. The first is located at the Farm to the Northwest of the city (see below). The second well is near the cabin in the woods, NW of the lumber yard.

The 2.9 map has multiple wells. One well which was very close to the city was removed during balancing, shortly after the 2.9 map was released. A second well can be found on a farm Northwest of the city. This well is found by following "Old Salt River Road." 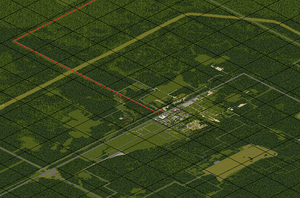 Roads, in red, leading to a well location. As seen in RC2.9. (click for a bigger version)

The player can reach the well from the gas station in central Muldraugh. This gas station is at the intersection of the Dixie Highway (also called "The Highway") and "Old Mill Road."

Following the path along the Northern Highway in the pre-alpha, survivors can find a well just northwest of the farmhouse. Wells can apparently be found in various other map cells.

After some time, the city's water supply will run out. When the faucets found throughout Knox Country no longer work, a survivor must rely on either wells, or whatever beverage the survivor has stockpiled.

Wells are the only infinite source of water currently in the game. Other sources, such as a Rain Collector Barrel are refillable when rain falls, but store only a finite amount of water