It's Muff3ntop again, The old information is below this in the wiki, it gives some basic stuff but is not organized well. Time to update this to build 41

An introduction to the item. Include links (example link is to Nails article) to other pages within the wiki where appropriate.

Windows can not be crafted as they can only be picked up from already existing houses.

Windows can be found on buildings and can be removed with a crowbar equipped and using the "pick up" function.

Normal house windows can be picked up, as well as trailer park windows.

What other windows can be picked up?

Can be found in the trunk of vehicles with these professions: 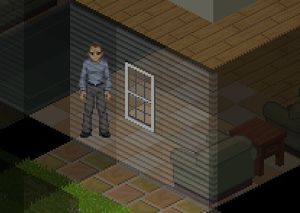 This article is about building windows. For vehicle windows, see Car Window.

A window allows the player and NPCs to see, shoot and enter specific buildings. Sheet ropes allow the player to descend out a window to ground level if the window is above the first floor.

A window may be barricaded using planks, nails and a hammer, improving the players carpentry skill. Each barricade gives the window increased health. A maximum of 8 barricades can be done, 4 on the outside and 4 on the inside. Without barricades, a window is very frail and testing has shown that it takes as little as 20 in-game minutes for a zombie to smash a window open.

Curtains can be made out of sheets or can be found pre-existing on the window and are used to cover windows. When covered, the window's line of sight is blocked from inside and outside. The curtains can only be opened and closed from the inside.

Climbing through windows is an ability that was added in version 0.2.0a. Both zombies and players can enter structures in this manner. As of 0.2.0R, it will be possible to snipe out of a window with a ranged weapon.

Windows can be instantly "smashed" by a survivor, dropping broken glass, for a quick escape but smashing the window has a chance cutting that character. Breaking a window using your bare hands guarantees bleeding. If a window is broken, the player can clear the broken glass to make sure they will not get cut. A weapon must be equipped for this option to be available. Furthermore, windows can be jumped out of from higher stories but will usually lead to severe injuries even if the survivor jumped out from only the second floor. Zombies can also leap out of windows from higher floors, but the injuries they get are lesser than the injuries a survivor may get.

A crowbar can be used to remove windows from buildings by using the Pick-Up toggle mode.