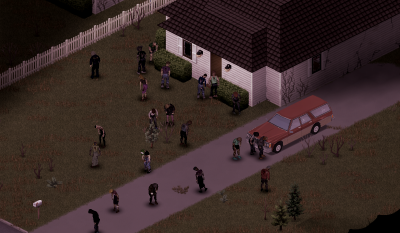 A Zombie is the player's main antagonist in Project Zomboid. These once human citizens of Knox Country roam the landscape in the thousands. They have an insatiable hunger for human flesh and will not hesitate to kill.

At the beginning of the game, the zombie population is densest on the west side of Muldraugh. As the game progresses they spread out across the town as the meta-game plays its role in moving the zombie population around. However, the west side will nevertheless have a greater concentration of zombies than the east side. On the outskirts of town (farms, lumber mills), only small pockets of zombies spawn naturally.

The vast wilderness around Muldraugh is more or less considered a "safe zone" since zombies never spawn in this part of the map. They also rarely move into the wilderness as not much happens there in the meta-game. However this region is sparse in supplies and housing, forcing the player to live a "camping lifestyle".

The default zombies in the game are traditional shamblers, but newly-turned zombies shamble a lot faster, close to the walking speed of a live human (about 1.5m/s). Zombies are attracted to noise, bright light (particularly from a flashlight or fire), and the sight of humans.

Zombies prioritize their pathfinding: the sight of prey (a player or Non-player character) attracts them first and foremost. With no human flesh in sight, noise is the next priority, regardless of whether it is man-made or not.

With the introduction of the 'wandering' mechanic in 0.2.0r RC2.9.9.11, zombies now occasionally move around without external influence. Whereas before hordes were idle they now wander about, breaking through windows and doors that happen to be in the way. When it rains, zombies wander even more.

At irregular intervals, events outside the player's control will cause zombies to migrate en-masse. For example a helicopter might fly overhead, a dog may bark, or gunshots may be fired in the distance by an unseen survivor. These events are part of the metagame, redistributing the zombie hordes over the map to balance gameplay over long periods of time. Needless to say, these mass movements pose great short-term risk to the player. Zombies take the most direct route available to them to reach the noise source, with no concern as to whether this happens to be through the player's shelter.

Zombies attack their prey by approaching and attempting to grab and bite. These attacks hinder the victim's movement. While a lucky survivor may be able to shake off a few uncoordinated attackers, zombies' tendency to move in groups can leave an individual surrounded, doomed to a grisly demise at the hands of the ravenous horde.

Attacks by zombies cause four kinds of injury: bites, scratches, lacerations, and blunt trauma ("punches"). Bites are the gravest and inevitably lead to the death (and reanimation) of the subject. Rumors emerged early on in the outbreak that there was a small chance of survival, but these were swiftly proved false hope. It is however more difficult for a zombie to bite, requiring them to have (relatively) protracted close contact with their prey. In contrast, a zombie's attempts to grab its prey are harder to avoid and often cause scratches, or in more severe cases, lacerations. While neither of these spell certain death, they remain dangerous as there is still a chance of contracting the infection (7% for scratches, 25% for lacerations) and slowly succumbing to the disease. Finally, "punches" are attacks that do not break the skin and carry no risk of infection. Punches deal a small amount of damage but unlike the other injury types do not require first aid of any kind, needing only time to heal and recover from occasional minor pain. Some survivors have traits that increase or reduce their susceptibility to the more severe zombie injuries.

While injuring the living is usually the primary concern, zombies are also able to damage inanimate objects such as doors and (player-made) walls. Though a few knocks on a sturdy structure will make little impact, zombies have a tendency to persist. Left to their own devices for a long time, or in larger groups, they will eventually break through. Additionally, the noise one zombie makes as it bashes itself against a door attracts its compatriots, who will often be convinced to join in or simply mill around until something happens. There is a small chance the zombies will lose interest if NPCs and players hiding inside a structure stay completely silent for a long period of time. However, survivors finding themselves in this predicament would be wise not to rely on such luck. This is especially true in buildings without barricaded windows as zombies can smash through and climb in with no resistance.

On seeing prey, zombies' attack strategy is very simple: namely to take the most direct path to grab and consume their quarry. This does not always correspond to the most stealthy approach and can often be quite noisy though brushing through vegetation, pounding on doors or barricades, or smashing through windows. They also tend to groan and produce other guttural noises on seeing prey, which can sometimes betray their presence. Despite this, zombies' shuffling movements tend not to make much noise of their own. Survivors should therefore stay alert and be aware of their surroundings, as luck will not always be on their side and zombies will not always announce their arrival.

As of Build 41, larger groups of zombies gain the ability to grab and pull down their prey for feeding. Zombies can also vault over fences, falling to the ground and briefly granting a window for the player to attack or escape before they get back up. Should they choose to attack, survivors should be wary of staying too close to the fence, as zombies vaulting over them can also perform a lunge attack that is capable of knocking the player off balance (or even to the ground, injuring them). Such an attack leaves the player vulnerable and unable to move for a considerable period of time, often leading swiftly to their death if multiple zombies are present. When more than one zombie vaults over a fence simultaneously, the fence will take damage (and eventually break after repeated instances of this). 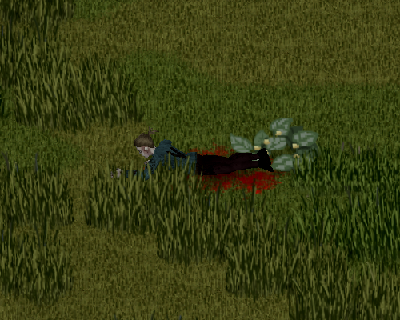 Occasionally, zombies may be turned upside, on its stomach or on its back, and may approach a survivor or a source of noise- by crawling. Sometimes, after a zombie is knocked down, instead of getting up, it can decide to crawl around. Other times, a crawler might just "play dead" by lying down and may emerge when it hears a noise or some prey. These zombies are even more dangerous than the standard walking variant.

This type of zombie moves extremely slowly, at about a fifth of the speed the standing zombie may move at. Therefore, when a crawler is in a horde, it will usually straggle behind and separate from the rest of the horde. However, because it moves slowly, it makes little noise. Although it may moan every now and then, its method of movement makes little noise and its slow speed makes it harder to hear- even if it were to make a lot of noise to reach its target. Furthermore, this type of zombie can be submerged by tall objects such as crops; survivors should be cautious when exploring unsecured/obscured territories. Because a crawler does NOT get knocked back when hit by a non-fatal blow, it is risky to fight even a single crawler head on with a melee weapon. In addition to this the crawler's main method of attack is to lunge at the player. This attack has a much higher chance to break the skin or result in a bite on the first attack when compared to walkers. However, a crawler is NOT capable of sieging a structure's door or window. Crawlers are unable to go over fences, and if obstructed by one during combat, will attempt to destroy the fence by attacking it.

One weakness is that it has trouble turning around. Unlike the regular zombie, a crawler has to push its entire body 180 degrees to turn around. A survivor can manipulate this by going behind the rotating zombie and finishing it off quickly, if the survivor has time. However, this approach will only work on an one-on-one situation. If there are more zombies- regardless of whether they are crawlers or standard walkers, this approach is too risky since it takes a lot of time.

It is unknown whether a crawler is able to get up and walk around like a regular zombie again, but there is at least 1 case where a zombie who was previously knocked down and became a crawler has decided to get up.

Humans (the player and the NPCs) who get too close to zombies may be bitten, scratched, or otherwise injured. Bites guarantee contracting the infection, but there is only a 25 percent chance when scratched. The thick skinned trait reduces infection by scratch chance to 12 percent.

The following formula is used to calculate scratch chance:

The meleeDefense variable is dependent on the user's guard skill for the weapon type they are currently wielding.

When a character has the Knox Infection, the sick moodle appears to verify it, and the moodle's intensity will slowly increase, until the character has a full blown fever, and will succumb to it. However, the sick moodle can also happen because the character ate raw or rotten foods, although sometimes the moodle appears out of the blue. When this happens, there will be no zombification, and the moodle will usually go away by itself with rest and by being well fed, and won't be of much harm to the character except decreased abilities for a small amount of time. If the Human has the Hypochondriac perk it is possible to have Knox Infection symptoms after a scratch without actually having the disease.

After a zombie is killed, its corpse will become a container and spawn some items inside it. A zombie's corpse has a capacity of 8.

There is a chance to spawn: