A map is both an an in-game item and a game feature.

You can access the world map by pressing 'M'. If the player is not playing apocalypse or has the option for minimap chosen in sandbox, you can click on the minimap.

You world map starts as just a very small area of your immediate surroundings in Knox Country. As you explore, it will grow to include all areas you have visited. Additionally, with the appropriate items, you can annotate the map, adding symbols and notes as needed. Annotations will not appear on the minimap. If the player dies and respawns with a new character, the information on their map will remain, including that gained from in-game map items.

There are many in-game map items for the different towns including (but not limited to) March Ridge, KY, Muldraugh, KY, West Point, KY, Rosewood, KY and Riverside, KY. Louisville, KY does have a map, however it is divided up into nine separate maps. Map items can be found in containers at gas stations, inside of car glove boxes, and on zombie corpses.

A special 'Annotated Map' item can be found as loot on zombie corpses. The Annotated Maps may have annotations including notes and symbols indicating as little as a point of interest up to detailed notes and symbols describing what you will find at that location. For example, a "Survivor House" which usually have boarded windows, a stockpile of canned goods and weapons.

Writing on a map 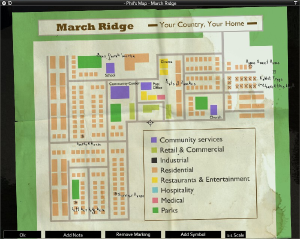 In game map with notations

You can take the following actions on either the world map or a while reading a map item.

The following symbols or icons can be added to the map using the Add Symbol button. 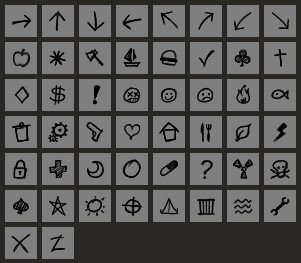