This article is about the playable character and is not applicable to the story. For the currently removed main protagonist, see Bob Smith.

The player, also referred to as the survivor, is a character that can be controlled in Project Zomboid, and refers to both singleplayer and multiplayer.

To play Project Zomboid, a character needs to be created. The character creation screen will allow the player to give the character a name, choose an occupation, as well as select certain traits (both positive and negative) for the character.

Regardless of the mode chosen, whether it be a Scenario, Custom Sandbox or Challenge, a character must first be created or a preset can be loaded if it was previously saved 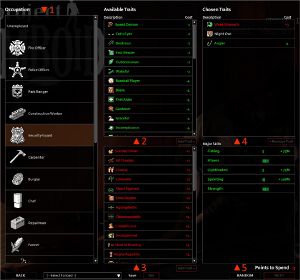 Traits Screen. Explanation of numbers to the left.

When creating a character, the player will first be greeted by this screen: 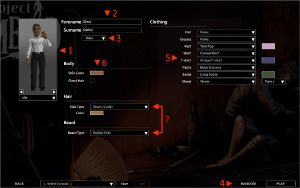 Character Creation Explanation of numbers to the left.

After clicking the next button on the character builder, the player will be sent to this screen:

Clicking "Next" will begin the game.

The players movement is controlled with WASD keys. The default movement speed is walking, which makes relatively little noise. Pressing C will toggle sneak mode, which further reduces noise and chance of being spotted. By holding the LSHIFT key, the player will jog while crouched or upright, making more noise than walking. The player can also sprint by holding LALT, creating a lot of noise and increasing the chance of being spotted, while also rapidly exhausting the player.

The player can interact with the environment by pressing E to open doors and windows, or holding E to climb over obstacles such as windows and fences (includes tall fences). Climbing through windows without a floor on the other side will result in the player falling, and causing damage dependent on the distance fallen. This can potentially break a leg or foot bone, becoming injured and in pain, severely reducing movement speed, taking a long time to heal. This can be mitigated by attaching a sheet rope to climb in and out of buildings through windows.

Using Sneak Mode will gain experience (XP) for the nimble and sneaking skills. The sneaking skill determines how well the character avoids detection. The player character also gains XP in nimble by climbing fences and moving through windows undetected. Light-footed is leveled by moving at any speed while being undetected, and reduces the amount of noise made by the player when moving.

The player can attack while unarmed or with an equipped weapon. To attack accurately, the player can aim by holding CTRL or RMB, entering "combat mode", which changes the cursor to the "iso-cursor". Clicking LMB will cause the player to attack. If unarmed, the player will perform a shove, knocking zombies back, which can also be performed with SPACE while a weapon is equipped. A shove does no damage but can knock zombies over, allowing the player to stomp the zombie's head. There are 9 types of weapons, each has its own pros and cons, these types include: short blade, long blade, short blunt, long blunt, spear, heavy, firearm, throwable or trap.

Passive attributes fluctuate throughout the player's lifetime, depending on the activities performed.

Weight is a player statistic presented on the Info panel, which can be toggled with J by default. During character creation, the player can choose between one of four traits which will determine their starting weight; if none are chosen, they will begin with the default weight of 80. Over time the player's weight may begin to vary from its starting value, in which depends on the nutritional value of the food they have been consuming. As the player's weight fluctuates, their traits will also change depending on their current weight. The game recognises that there are actually five different traits relating to weight, rather than just the four which can be picked up during character creation, whereas the default/normal weight is considered the absence of a trait.

The different effects caused on the player, along with their weight ranges can be seen in the table below.

Note that the emaciated trait and degeneration currently only exists in the game mechanics and therefore have no visual representation in-game.

Strength determines the player's carry weight, as well as certain other factors, such as opening locked windows and melee or shove knockback. It increases melee weapon’s damage by 5%, and a flat 0.2 damage from stomping downed zombies. It also increases shove/push knockdown chance.

This can be leveled up mainly by doing strength exercises, carrying more than 50% of the carry capacity, and running. Strength experience is also granted when hitting zombies or trees with melee attacks.

Fitness increases a multitude of player abilities. It reduces endurance loss, increases endurance recovery, increases movement and attack speeds, reduces damage from long falls, increases chance to push a zombie off when attacked and reduces stagger and trip chance when a zombie lunges after falling over a window or fence.

Fitness can be leveled by sprinting, doing exercises and using melee attacks while the player is not overexerted.

A shot of the skills panel.

Gold Squares are already obtained Skills. Skill names that have arrows beside the name indicate that there is a multiplier applied for the XP the player earns in that skill. The player earns this multiplier by reading skill books.

There are various player stats that need to be managed in order to survive. These stats are not represented as a meter, as they usually are in other games, but instead as a moodlet, which displays the player's current status. Player stats include:

A characters' health is displayed in the health window, which can be toggled by clicking the heart icon on the top-left of the screen or pressing H. Once the player's health drops below 80%, an injured moodle will be displayed on the top-right of the screen.

The player can recover from minor injuries without requiring any further attention. These injuries may be shown on the health window as "pain". The speed of recovery can be affected by the player's stats, as displayed by a moodle. Being well-fed will speed up recovery whereas being hungry or catching a cold can make it slower. Other moodles, such as being sick or hungry, can reverse the process - further damaging the character.

Any wound that breaks the skin will cause bleeding, which will need to be bandaged with either a bandage, adhesive bandage, ripped sheet, Leather Strips or Denim Strips. Applying a clean bandage and keeping clothing clean reduce the chance of infection. Disinfecting a wound and then applying a sterilized bandage or sterilized rag further reduces the chance of infection, and can even cure the infection.

However, the bandage will become dirty over time, which will not only negate the previous bonuses against infection but will even increase the chance of infection if left unchanged. This requires removing the bandage and replacing it with a clean one. The type and severity of the wound will determine the rate of a bandage getting dirty.

Sleep management is a vital part of the gameplay mechanics. The player will get tired everyday, and the level of tiredness affects the player's spatial awareness, greatly increasing the chance of being caught out by zombies. The player must choose where and when to go to sleep. Sleeping will gradually remove the tired moodle, and can take between 6-8 hours of regular sleep, provided the player is not woken by a nightmare or nearby sounds. Sleeping can be done anywhere, such as the ground, a bed, chair or vehicle, each of which with a bed quality. A low bed quality can reduce the rate of tiredness and result in gaining damage.

In Multiplayer, sleep can be enabled or disabled by the server owner. If sleeping has been disabled, the player does not need to sleep, and when a bed or other piece of furniture is clicked, the message "Not tired enough to sleep." will appear even if the player has taken Sleeping Tablets.

Managing the inventory is an essential factor in survival. Through it, the player can acquire various resources and tools that can be used or stored for future use. The inventory area also functions as a crafting panel using the context or crafting menus. The context menu is accessed by right-clicking on the object desired to modify, while the crafting menu is accessed using the B key. Here the player can view all the recipes available to their character, according to their skill level and known recipes.

In the clothes panel, it is possible to see the items the player is currently wearing, this is used to keep the player's body temperature at the proper level. Short clothes allow the character to cool off and warm clothes keep the character warm and protected from the cold.

The Heavy Load appears when the total inventory weight value exceeds the player's weight limit - the value of which is defined by the player's strength level - drastically reducing his speed. This can be avoided with the use of baggage. Baggage (such as Plastic Bag or a backpack) is an object that can be carried in hands or back and allows the storage of items from the player's inventory, reducing their weight. In addition to baggage, objects can also be stored in containers such as cabinets, drawers, shelves, etc. Vehicles can also be used to store objects and transport them to another place without overburdening the player.

A safe house is a defensive structure that the player can construct as a base of operation. The player is able to build or secure a safe house with carpentry. It usually started by closing all windows and doors and securing them. The player can secure windows and doors by barricading the with Wooden Planks, a Hammer and Nails are required to do so. The player can further secure a safe house by putting sheets over the windows. Where there is either a sheet or a curtain on the window, the player will be able to close and open the curtains by right-clicking on them. Players can further refine their stronghold by placing doors, windows, and wall pieces, in addition to crates. Players can also destroy their walls by using a sledgehammer.