Project Zomboid, commonly abbreviated as PZ or Zomboid, is a zombie survival simulator currently in early access, with open world, RPG and Sandbox game-play elements. Coded in Java and Lua, Project Zomboid is set to be released on PC, Mac and Linux.

Currently, in development by The Indie Stone, Project Zomboid has been in active production as far as March 15, 2011: the game's Official Announcement date. The Indie Stone have been very open with their fans on the forums, which has allowed the game to evolve along with the growing community's requests and the developer's own image of the final product.

The game is currently in Alpha stage, at 41.78.16, which is distributed on GOG and Steam Early Access. A demo of Project Zomboid, showing the game as it was in early November 2013, is available on Steam. They intend to do this until The Indie Stone fully releases the game. 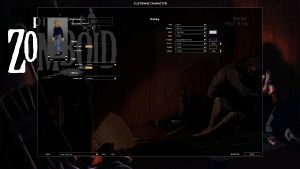 "Powerful combat. Longer lifespan. A challenging playstyle based on PZ's previous Survival mode." Likes a challenge, with more focus on combat familiar to players of earlier builds. Survivor mode weakens zombies by lowering their strength and preventing them from dragging down players. Survivor mode strengthens players by decreasing rear vulnerability and allowing for weapons to hit multiple zombies in a single swing.

"Construction, Exploration and Farming focus. A more relaxed experience." Likes a more chilled experience of building, looting, and farming, and less zombie focus. There are far fewer zombies, with a population of 20% of the standard. These zombies are also substantially weaker with weakened senses, decreased strength and toughness, and no drag down ability. To make up for the weaker zombies, almost all loot is rarer, except food, and player stats and clothing degrades faster, requiring more material to keep the character afloat.

The custom sandbox allows the player to adjust the game settings to the way they like. After choosing a starting location, the player can choose their own options, or choose a preset to customize. In the Saved Presets box at the bottom, each default option is the same settings used in the default game modes. This includes default options since removed from the standard playstyle options.

You get out of the shower and fall badly. You're blind drunk and have a nasty cold.

[A challenge inspired by 'A Really Bad Day' from the awesome, wonderful, and MUST-PLAY Cataclysm: Dark Days Ahead]

As skies darken, the dead that stumbles over the earth grows restless.

House in the Woods - Last Stand

You can hear them approaching. Hordes of deadheads, encroaching on your isolated cabin from every angle. Death is inevitable, but a shotgun is close at hand.

Another day, another cabin, ready to be bloodied. The hordes are upon you, and your death will be as painful as it is gruesome. So go out fighting... Last Stand – Accumulator features endless waves of zombies in ever-increasing numbers. Use the money earned by killing zeds to buy equipment, level up, and repair your blood-soaked weaponry.

People first saw it on the water. A faint white blanket over the Ohio River.

Unseen, unheard, and relentless in the pursuit of the living.

It's mid-July, but suddenly there's a chill in the breeze. In a mere three days' time, winter will set in like no other before it.

You awake in an isolated location. You have meager supplies, and the undead hordes might be slowed by the intense cold - but they are no less deadly. 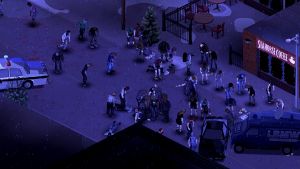 Played from an Isometric point-of-view, players must survive a zombie apocalypse in Knox Country, a partially fictional location heavily influenced by the area around real-world Muldraugh, West Point, and Louisville Kentucky, U.S.A.

Survivors must scavenge weapons, food, and medicine while exploring vacated streets and buildings. When encountering zombies, the player must fight with whatever he has on hand which can range from a powerful Fire Axe to a puny Butter Knife. Sometimes, running away is the best solution.

When night falls, the player must fight against himself: exhaustion, hunger, thirst, and boredom. These select few status effects, called Moodles, can be treated by sleeping in beds, eating previously scavenged food, refilling your Water Bottle at your nearest faucet and entertain yourself by reading books, magazines and newspapers. The Moodles increases the immersion and realism of a zombie outbreak as well as a real human life with needs.

Players can fortify a Safehouse by barricading the doors and windows with Wooden Planks and Bed Sheets using carpentry tools like Hammers, Nails and Saws. More creative players can go as far as building a custom house by creating Walls, Doors, Window and Door Frames and Stairs.

After enough training, the players Skills will increase in level with a little song to indicate that the skill has leveled up.

The main goal in Project Zomboid is to stay alive as long as possible... or die trying. When the player dies, a message will scroll from bottom to top indicating how many years, months and days have passed since the game started. Also, dying Auto-Saves the game, meaning you have to start a new character. This prevents "Time-Traveling Quick Load Cheating", making the game more Hardcore.

Project Zomboid, primarily coded in the ambitious Java programming language, is being developed by The Indie Stone, a small independent gaming studio based in the United Kingdom and Canada, with contractors from all across the globe.

Despite being in the pre-alpha stage, the early builds/versions have garnered a considerable audience, praising the realism and old-school isometric approach. Now with almost 10 000 registered forum users, the early versions of the game "morphed" with the community's suggestions and The Indie Stone's view of the final product. Anyone can go to the Suggestion forums and share any ideas they have for the future, and even have a chance to be replied to by the developers themselves.

As of March 27, 2012, Update v2.0r has been announced and has generated a lot of hype, mainly due to new game mechanics implementation, new weapons, and overall game polish. With over 780 replies and 63000 views, it is one of the most active threads since the new update's announcement. Some jokers on the forums went as far as changing their post's title from RE: UPCOMING to RE: RELEASED, tricking newer forums members into believing the update has been released.

On April 10 2012, The Indie Stone posted 2 new videos about a new sprite animation system. Opinions on the forums were divided. Following this, lemmy101 posted this thread regarding the new sprites.

At the 2012 BAFTA Awards, Markus "Notch" Persson, during his Special Award speech, mentioned Project Zomboid along with Fez and Proteus.