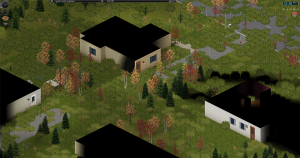 Example of erosion taking hold of the landscape

Erosion is a game mechanic which causes growth of plants and deterioration of walls and buildings in full.

In base Project Zomboid, it takes 100 days until 100% growth. The day that Erosion reaches 100% growth can be changed in Sandbox settings. If you choose "Six Months Later" in Custom Sandbox, it will cause Erosion to be 100% grown upon loading in.

Erosion is mostly visual as of now, only making the world feel more rundown and overgrown as the apocalypse progresses, along with some functions that will require the player to adapt and maintain.

Erosion started out as a mod created by now developer TurboTuTone (Turbo) released in late 2013 on The Indie Stone forum. Turbo later joined the team in the second half of 2014, with the implementation of erosion being his first task.