Skills are abilities a character has learned, with their proficiency at that skill quantified by its skill level. The skill level can be increased by allocating skill points, which are earned by gaining experience points (XP).

Skills are grouped into categories. There are currently six main skill categories: agility, blade, blunt, crafting, firearm, and survivalist. Each of these contains multiple skills. There is also a passive category, containing the fitness and strength skills.

The player's current skill levels are found by opening the 'player status' window (click the heart symbol at the top-left of the screen) and selecting the 'skills' tab, or by pressing C.

Selecting the white arrow at the top right of the window toggles between viewing the player's passive and main skill categories: 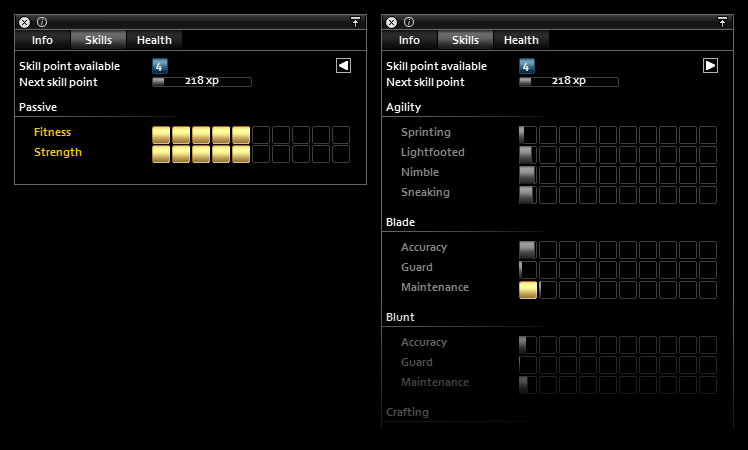 As the player performs tasks they gain experience points (XP) that count towards skill points. Skill points are earned when the player's XP reaches predefined levels, with successive levels requiring greater increases in XP. The player's current available number of skill points and the XP required to gain another are shown at the top of the skills tab:

Skill points alone provide no direct benefit to the character; to become useful, they must be assigned to a skill. However, in order to increase the level of a skill, it must first be trained sufficiently to allow a skill point to be allocated to it. In the player's 'agility' category shown below, only the 'nimble' skill has been trained to the point that it can be leveled up.

Skills are trained by performing actions associated with that skill: for example barricading a window will train the carpentry skill, while preparing a meal trains the cooking skill. Training a skill generates XP that count towards that skill, while also being counted towards skill points. The XP currently gained by training a particular skill is shown by hovering the mouse over it in the skills tab, along with XP required to reach the next level. As with progress towards skill points, the XP that must be gained to train a skill to the next level increases as it is leveled up.

Allocating skill points permanently increases skill level. Higher level skills can allow the player to perform tasks more effectively, or may unlock new abilities. For example the 'maintenance' skill in the 'blade' category, which is trained to level 1 below, will reduce the chance that the player damages a bladed weapon in combat.

The figures shown here are not cumulative. For example improving 'regular skill' such as carpentry from level 3 to 4 would require 750XP.

Skill books can be used to increase the rate at which the player trains a given skill. These can be found throughout the world on bookshelves or in other containers. Books are only available for skills in the "crafting" and "survival" categories. Additionally, books only apply to specific levels of skill advancement. For example "Carpentry for Beginners" will only provide a benefit to a player with level 0-1 carpentry. Books can only be read if they apply to the player's current skill level.

Reading a book multiplies the rate at which the player trains the associated skill. The multiplier increases in proportion to the player's progress through the book and reaches a maximum when the book is fully read. The presence of a multiplier on a given skill is indicated by animated arrows in the skill tab. Hovering the cursor over a skill level reveals the current multiplier. Below, the player has a multiplier of 3x on the cooking skill. Since training skills generates XP, reading books is an effective way to quickly improve the player's abilities.

The choices made at character creation determine a character's initial skill levels. Since skills take a long time to train, careful consideration should be given to the skills chosen at the start of the game.

The player's initial choice of skills are also important since skills they begin with receive an 'XP boost'. This bonus is dependent on the level the player begins with on that skill, and remains active over the course of the game. Starting skills' names are highlighted yellow in the skill tab, and hovering over the skill level will display the XP boost received. Here, the player has XP boosts for both the 'fitness' and 'strength' skills:

The XP boosts gained with different starting levels are as follows:

Note: Upon leveling Strength or Fitness, your character will gain or lose traits.